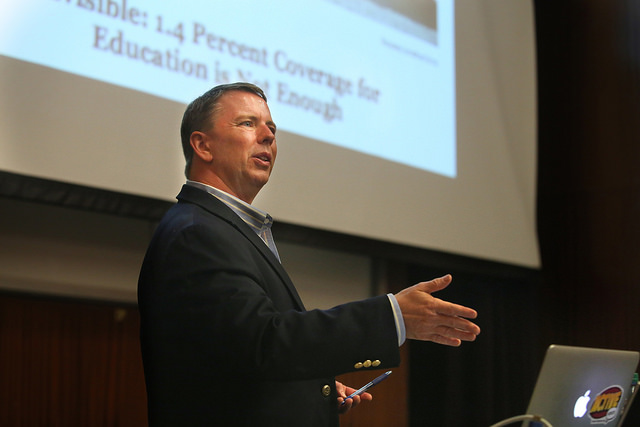 Frank LoMonte should have good news to report when he gives the keynote address for the College Media Mega Workshop on July 13, 2017. That makes 13 states with similar laws, a feat that’s been achieved in just a few years, says LoMonte, who serves as the executive director of the Student Press Law Center. We recently chatted with him about his work, his upcoming keynote and the future of First Amendment rights for student journalists. (This interview has been lightly edited.)

ACP: For anyone who might not be familiar, can you tell me little bit about what SPLC does?

LoMonte: SPLC is a nonprofit advocacy organization that’s been around since 1974 with the mission of providing legal support to people working in student journalism. The work of SPLC falls into two main issue areas: freedom of the press and openness in government. We provide support to the student media both to help them protect their right to publish and also to help them get access to the records and meetings and sources that they need.

Great. And you’ll be giving the keynote at the College Media Mega Workshop — what are you planning on talking about there?

Well, I do think that for sure I’ll highlight some of the successes and opportunities going around the country with New Voices. It’s a very exciting time of opportunity, and it’s some good news amidst a lot of discouraging news for people in media. There’s certainly a lot of negativity around our industry, both economically and in terms of the level of public hostility being voiced, but New Voices is a good news story in that it shares that there’s still a broad recognition that journalism education has value and that it’s worth protecting.

I don’t think it’s possible to give a talk about news media to a room full of journalists today without mentioning what’s going on on the national scene. It is a perilous time for public support of quality journalism, and I think it’s our obligation to find ways to make that case better than we have been.

And that starts with working across the curriculum at colleges and high schools to incorporate the consumption of news into people’s everyday routines. That’s my soapbox issue, and it’s going to be my soapbox issue for the rest of my career. We’ve got to get young people consuming and discussing and sharing high-quality journalism, because otherwise we will lose the market that sustains journalism as an industry.

Definitely, I totally agree. Can you tell me a little bit about the origins of the New Voices project and the journey to this point?

The roots go all the way back to 1988, when the Supreme Court decided the Hazelwood decision, which drastically reduced the constitutional protection of journalism in schools. There was an immediate reaction among the journalism education world, but the progress pretty much stopped for a decade between 2005 and 2015. We saw a handful of bills proposed that went nowhere, and I think you can blame a lot of different factors, but I think the single biggest factor was the explosion of social media. There was kind of a national sense of panic that kids were abusing social media to bully and threaten each other, and it was just impossible for a very long time to have a rational conversation about the rights of young people when the national dialogue was consumed by this narrative about online bullying.

That seems to have died down a bit, and it’s now possible to have that conversation. So in 2015, some advocates at the University of Jamestown got together and drafted what became the New Voices of North Dakota Act. I don’t think a lot of people gave them very good odds of succeeding, but they went about it very methodically and with great determination, and were able to get the bill passed unanimously with bipartisan support.

That was a wakeup call for the entire rest of the country, and people started ringing our phones off the hook asking if their state could be next. That ignited a national movement for advocates in journalism and education and law and in civics to get together and rally around student journalists. Since North Dakota, we’ve seen bills passed in Illinois, Maryland, Vermont, Nevada and now Rhode Island. So that’s a lot of progress after being stalled for a very long and frustrating time.

That’s incredible. Is there anything that students in college media can do to get involved in the project?

The single biggest thing is to make sure to call out and publicize really outlandish instances of censorship. Where these bills have failed is often where people are not convinced that they have a serious problem in their own states. So we have to document times when people are threatened or intimidated out of covering legitimate news stories. We have to bring the instances to widespread public attention and make the case for why stronger legal protection is needed. So that’s the single biggest thing, to bring those stories to light and amplify that.

Beyond that, in every state so far, we have found that the most persuasive voices in front of legislature committees have been students. The legislators most want to look students in the eye and make sure they’re trustworthy. You’re asking adult authority figures to give over a lot of control to young people, and those young people need to reassure their legislators that they can handle that. So I think that’s the secret weapon in every state, to have really serious and impressive young people come talk about how they formulate their newspapers. When legislators see that, that student journalists take this work very seriously and very professionally, then it’s a lot easier to win their trust.

That’s really interesting. And you normally give a few sessions other than the keynote you’re giving this year. What can we expect from you?

I’m going to do a program for broadcasters, where we’re going to focus both on copyright and the use of music in broadcast and what is and isn’t permissible, and then also look at managing the website that accompanies your broadcast station. Almost every college broadcaster now has a digital presence, and I think it’s important for everybody that’s publishing online to know about state and legal publishing practices. We’ve had so many unfortunate cases of people being threatened with copyright infringement lawsuits recently, so I think you can’t overemphasize good, safe copyright practices. So that’s going to be a big focus.

And I usually bring some examples, and I will again this year, of interesting stories that student journalists have done using public records laws to try to inspire people to take advantage of those laws. There are a lot of tools at your disposal if you know where to look. Having been a reporter as well as a practicing attorney, I have a lot of experience working with those laws, and I really enjoy working through those problems with journalists, trying to help them get better access.

One overriding message is that colleges are way more secretive and more image-conscious than they’ve ever been before, and it’s harder than ever to pry information loose. You’ve got to be a really aggressive user of open government laws and learn not to take no for an answer. So that’s going to be a big focus of my remarks.

See Frank LoMonte’s keynote at the College Media Mega Workshop on July 13, 2017. If you’d like to support SPLC or get involved, visit splc.org.